The one thing I have to stress, above all else, was that it was amazing. Indescribable, even, though I’ll try my best to do justice to this story of the eclipse itself, as well as the adventure of getting there.

The video I created to document our trip captures many of the key scenes and emotions from the long weekend.

But some other things are best written out.

Nathan had been planning this trip to see the complete solar eclipse for three years. As I settled into the car early on Saturday morning with a piping hot thermos of tea balanced on one knee, I contemplated whether this aspect of dating a planetary geologist was a boon or a burden. The drive from Los Angeles to the Sawtooth National Forest in Idaho would take close to 15 hours across two days. I’ll admit that, at the start of our trip, I wasn’t convinced it was worth it.

Nathan’s unusually excited smile persuaded me to at least give it a try.

Fortunately, the drive itself passed quickly. The highway brought us first through the stark plateaus and patchy Joshua trees of the Mojave Desert, then into the Great Basin of Nevada, where the road on either side gave way to vast flatlands of sagebrush bordered by sharp peaks and low clouds.

As we entered the Sawtooth National Forest Sunday morning, our windows filled with the deep green of pines and firs.

Along the road were glowing orange bulletins warning of heavy traffic expected on Monday, the day of the eclipse, as well as the occasional sign indicating a recommended “Eclipse viewing area → .”

We still had farther to go. By this point we were well within the projected totality band, meaning that the sun would be completely covered by the moon during the eclipse. If you watched the eclipse from outside the totality band, you only saw a partial eclipse, with maximum sun coverage decreasing the farther away you were from the band – for example, back home in Los Angeles we only would have seen about 60% coverage, as you can see on this NASA eclipse map.

However, even within the totality band, there’s substantial variation in how long the sun remains covered. Nathan navigated us to a spot right in the center, where the sun would remain covered for over two minutes.

Most camping spots were already snatched up, but we found a secluded opening nestled beneath some firs. On one side we had a soft creek, and on the other a small meadow that served as the perfect vantage point for observing the eclipse.

As the sun rose toward the tops of the conifers the following morning, we were busy with preparations. Ideally we should have had solar filters for our cameras, which are designed to protect the light sensors the same way eclipse glasses protect human eyes. As we lacked this specialized equipment, Nathan taught me how to create a cheap solar filter using some extra pairs of eclipse glasses. 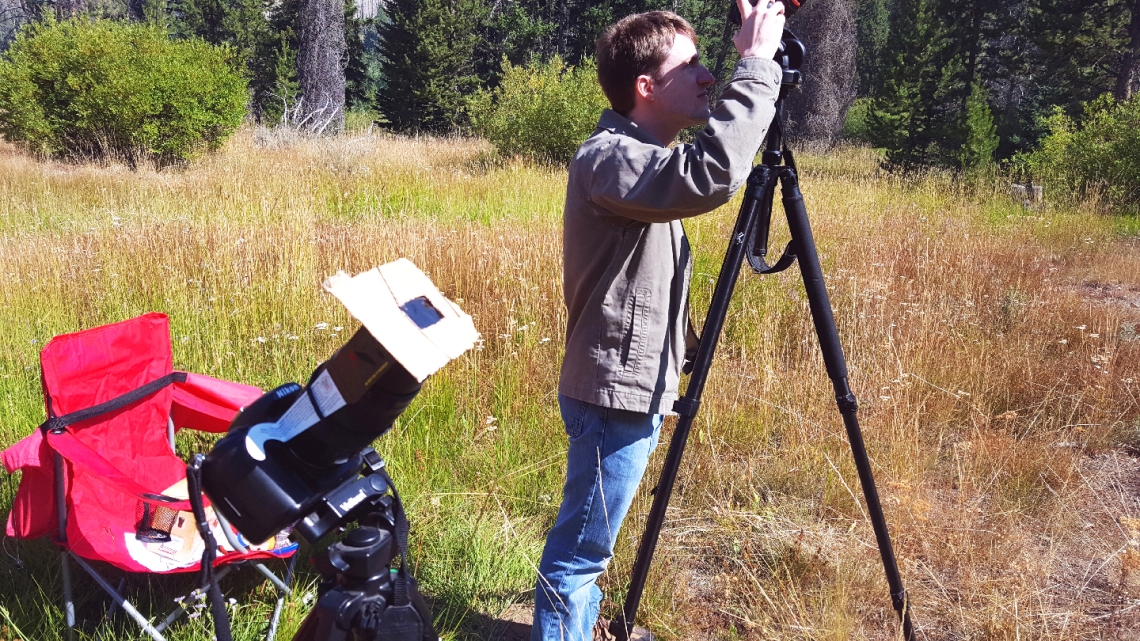 The method worked surprisingly well. As we were testing our equipment, we even observed some sun spots. 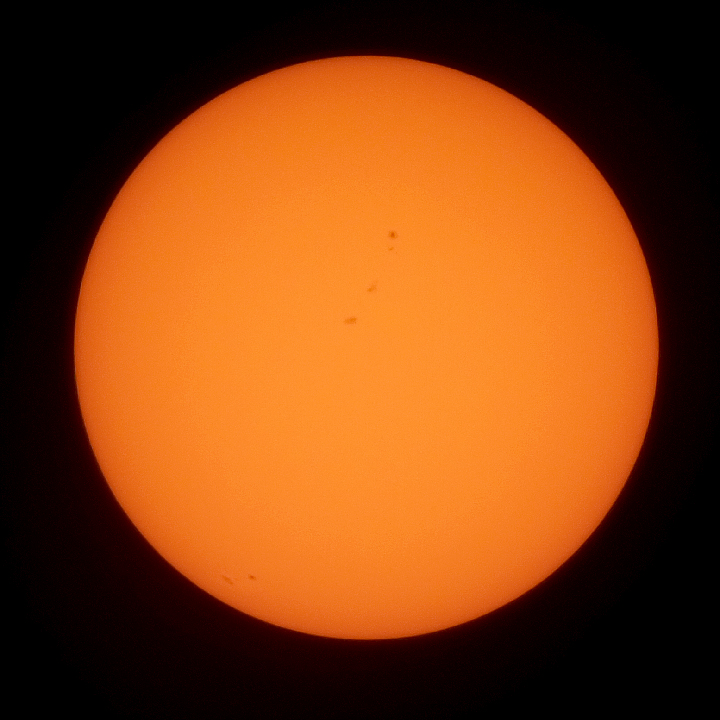 With our optics properly protected, we waded into the tall grass of the meadow to set up our tripods, then settled into our chairs to wait. The first sliver of the sun disappeared just after 10 a.m., but it would take another hour and a half for the moon to move fully across.

That solar eclipses occur at all is, in itself, spectacular. The sun and moon are so vastly disproportionate in size that it boggles the mind to think Earth’s little satellite could completely block out the center of our solar system, but it just so happens that the moon is both 400 times smaller than the sun, and 400 times closer to Earth. A perfect fit.

We watched the bright circle of the sun slowly eaten away through our eclipse glasses, the viewfinders of our cameras, a pinhole projector, and even the leaves around our campsite, which filtered the diminishing sunlight into dancing crescents. 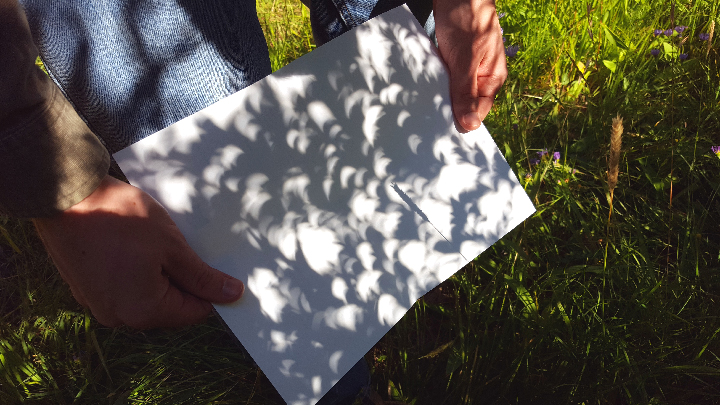 The light faded slowly at first, accompanied by a noticeable drop in temperature. The change was surprisingly unlike a typical sunset. There was something off about the coloration of the light, more like a deep overcast, or even the amber-tinged smoke that fills the skies during wildfires.

As darkness neared, small flocks of birds fluttered into the surrounding trees, and flying insects re-emerged to buzz around our heads.

In contrast to the slow fade across the first hour and a half, the final vanishing of light happens shockingly quickly.

A careful (and protected) eye on the sun in these last few seconds can spot Bailey’s Beads, which refers to circles of light that appear along the edges of the final crescent as it slips away. The beads are created by the topography of the moon – they occur when the moon’s profile is so close to fully overlapping the sun that the moon’s mountains reach the edge, while the valleys continue to let some last slivers of light through. 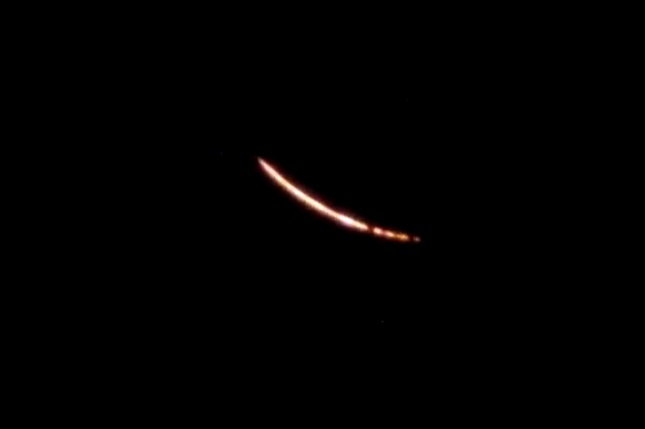 Then the sky turned to midnight blue, and above us was a perfect black circle outlined by a halo of white rays. We removed our glasses and, for two minutes in the middle of the day, we stood in night, staring at a blackened sun with our naked eyes.

A closeup even revealed two solar flares emerging from behind the edges of the moon’s shadow.

We were so enthralled by the scene above us that the time seemed to slip by in an instant. A bead of blinding light reappeared at the top right corner of the moon, then seconds later the day returned.

Was it worth the 15 hours there and back again? Absolutely.

There was something indescribable about the experience, something that simply can’t be captured in even the most stunning photographs. Ancient civilizations crafted entire mythologies to rationalize the sudden darkening of their world, and modern civilizations drive for hundreds of miles to watch our tiny planets spin into just the right place in this infinite universe for just a few short seconds.

So why did it take me so long to realize what an amazing experience this would be? This was the questions that I, frustrated, kept asking Nathan as we packed up and departed the forest.

We all know what a solar eclipse is. We know them as monumental events from mythology, novels, television. And yet, for me and perhaps for others as well, there was a strange disconnect in what I expected to actually see. When something like a solar eclipse exists only in the realm of stories, it’s easy to assume that some part of its magnificence is exaggerated, and that it couldn’t possibly be as awe-inspiring in real life.

This is one of those things where the real-life experience trumped anything I could have imagined from a story or an image on a screen.

The next total eclipse over the United States will be across the central and northeastern states in 2024, and the next eclipse over the entire US will be in 2045. You can explore full and partial eclipses in other parts of the world here.

If you have the chance to make your own trip to see a total eclipse, I couldn’t recommend it more highly.