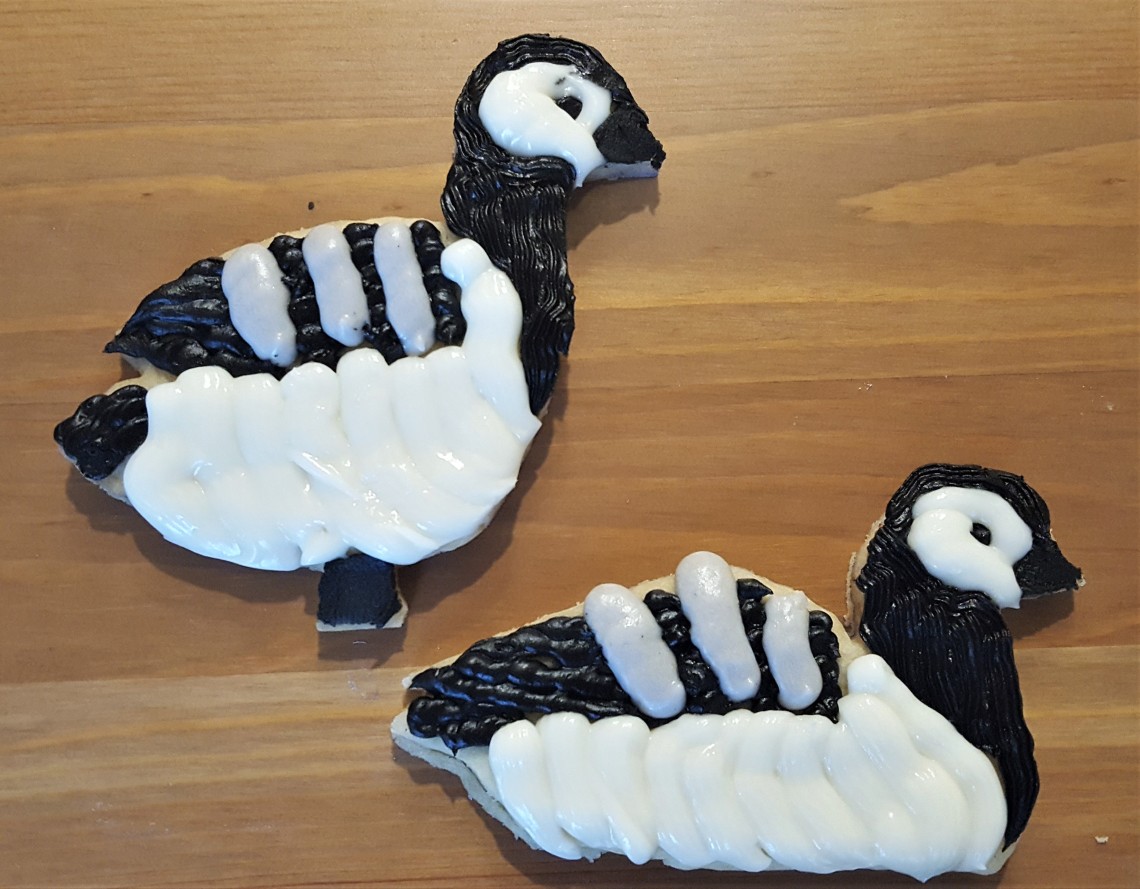 All black head and neck, with a a white face and chin. Gray wings and belly, white rump, black tail.

Most common in Europe; only a rare winter visitor to North America, typically in the Northeast.

Before we knew about migration, a few historical observers came up with some pretty phenomenal explanations for the stark absence of their favorite birds during parts of the year, stories like swallows sleeping under mud or geese being born from barnacles.

The Barnacle Goose myth was at times believed so ardently that some clerics argued the birds could be safely consumed during Lent and fast days, as these creatures were not composed of flesh, but rather barnacles, which were considered a fish.

An early description of Barnacle Geese by Giraldus Cambrensis in his 1187 Topographica Hiberniae explains:

“They are produced from fir timber tossed along the sea, and are at first like gum. Afterwards they hang down by their beaks as if they were a seaweed attached to the timber, and are surrounded by shells in order to grow more freely. Having thus in process of time been clothed with a strong coat of feathers, they either fall into the water or fly freely away into the air. They derived their food and growth from the sap of the wood or from the sea, by a secret and most wonderful process of alimentation. I have frequently seen, with my own eyes, more than a thousand of these small bodies of birds, hanging down on the sea-shore from one piece of timber, enclosed in their shells, and already formed. They do not breed and lay eggs like other birds, nor do they ever hatch any eggs, nor do they seem to build nests in any corner of the earth.”

The claim that Barnacle Geese do not “seem to build nests in any corner of the earth,” is, of course, false. They do, however, breed in such remote parts of the arctic that understandably few people ever found them.

These nests are also frequently placed high on mountain cliffs. While such a precarious position protects the eggs from predators, once the goslings hatch, they must move in order to find food. The result is one of the most amazing spectacles in the bird world: a flightless, freshly hatched gosling must survive a plummet from its nest to the safety of the ground several hundred feet below.

Royal Society for the Protection of Birds