While constant travel inspires a thrill of adventure, it’s always comforting to return to a familiar place.

I spent six nights at the Basalt campground in San Luis Reservoir last summer, the highlight being a clumsy family of Great Horned Owls. When I returned, the owl pair was still hooting to one another in the trees, the kingbirds were laughing at their loudest so far this summer, and we had a marvelous view all to ourselves.

My survey site was about half an hour north, at the Salt Slough Unit of the North Grasslands Wildlife Area, part of the San Luis National Wildlife Refuge complex. 1911 must have been a wet year, for here was another site described by the historic surveyors as inundated by an angry river. Flooding in the Central Valley doesn’t really work like that anymore; the wildlife refuges in particular are treated with carefully-managed cycles of man-made flooding. When I started surveying the meadows were lush, but notably un-submerged.

The perimeter canals, however, were brimming with water. On my third day of surveying, the channels had just been opened, and water was beginning to spread across the landscape. Just enough to keep the reeds happy, and perhaps encourage some duck broods.

However, the greatest change to this particular landscape has come in the form of invasive plants. My bird surveys are accompanied by plant surveys at each point, and a common theme across the valley is the prevalence of introduced species. The golden grasses that swath the hillsides are almost exclusively European, introduced long ago to feed cattle. But I have never seen such a plague as here. Mustard plants covered fields in stalks two inches thick, their branches reaching well above my head. One of the unit managers told me horror stories of star thistle patches 8-10 feet tall. The birds are seemingly still abundant in the weeds, but many grass specialists are long gone.

Meanwhile, Logic headed south to survey the mouth of a barren canyon near Panoche. Even the historic surveyors remarked on the desert-like appearance of the landscape, and made special note of the “11 eucalyptus trees” by the former ranch house, the only trees for miles.

The oasis has grown a bit since then: a few more eucalyptus, some almond orchards, and a McDonalds. 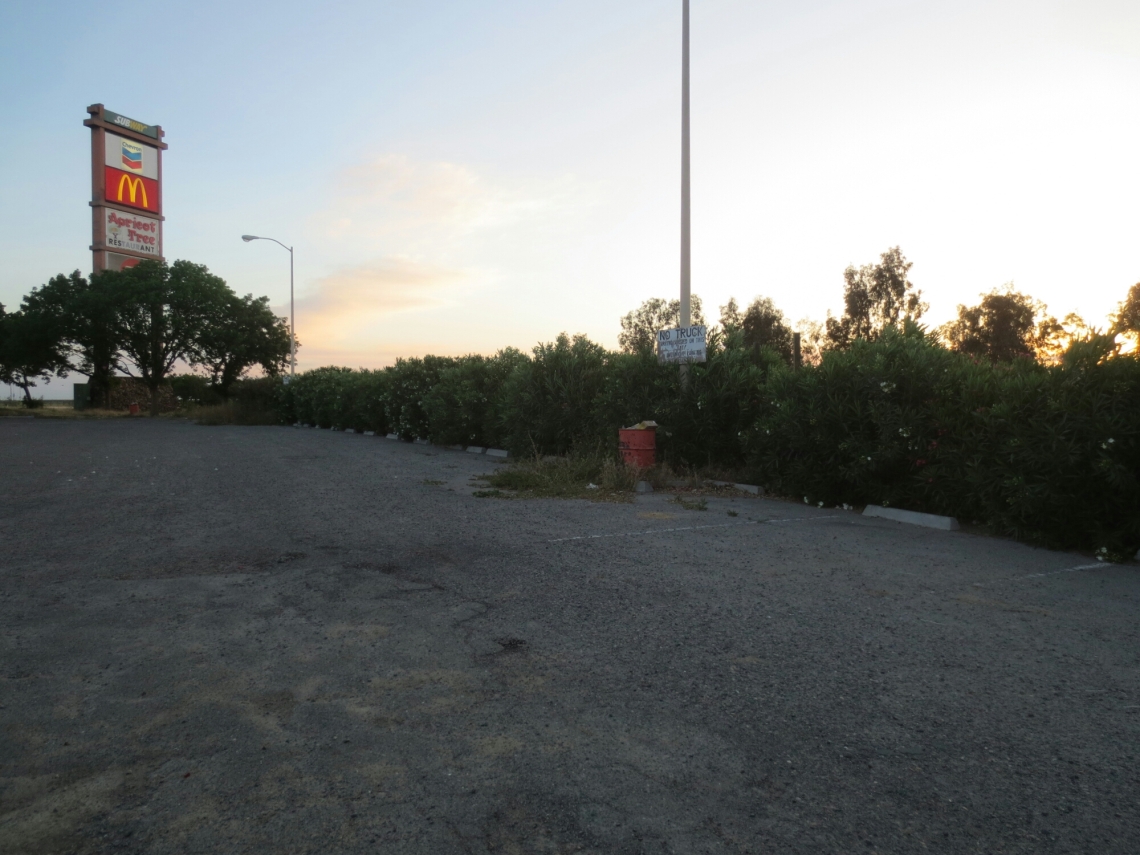 The result is something of a bird trap. Species in migration or wandering a little out of their range have nowhere else to go, and so concentrate in places like this. Logic was delighted to report a Red-breasted Nuthatch in the McDonald’s parking lot, as well as a Hermit Warbler, Western Tanager, and Vaux’s Swift among the eucalyptus trees.

We enjoyed much of our evenings back at camp, where we could finally enjoy some peace and quiet. Sure, the wind sounded like it was going to carry us away to Oz at night. But overall, I’d be delighted to return here again someday.