Rivers, rivers everywhere. And not a drop to drink.

But thankfully, plenty to swim in. Because it’s been terribly hot around here.

Mountain rivers are the life blood of California. They bring water to cities, suburbs, and farms throughout the state. And here in Butte County, nestled in the northeastern corner of the Central Valley, the rivers are a central part of biology, history, and everyday life.

Our bird transect crossed Butte Creek, a small waterway snaking down from the Sierras.

In between bird spotting and the roar of traffic on the highway just behind us, we looked down from the bridge to see small salmon drifting in the current, and even a pair of beavers tending their lodge. 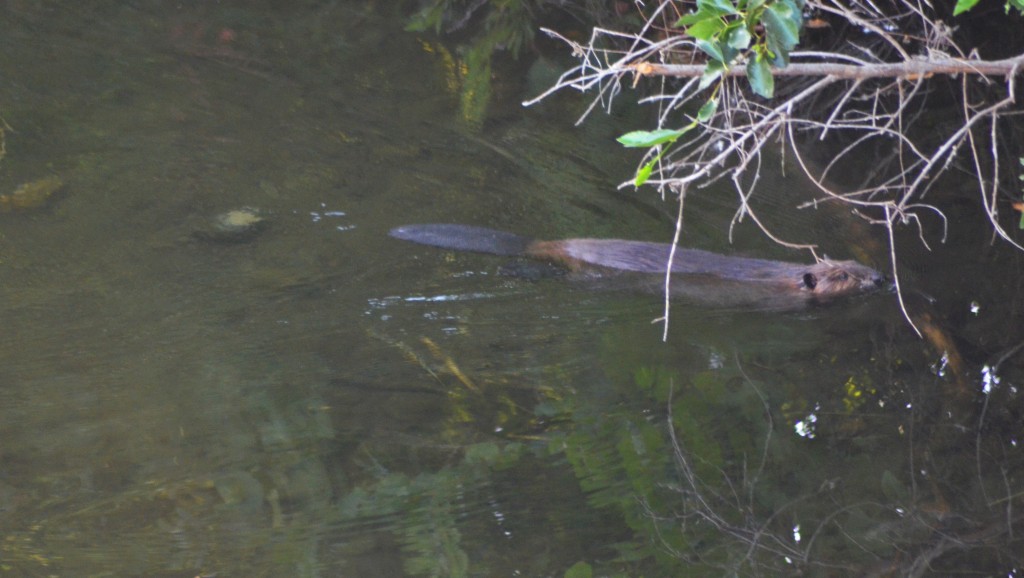 Our little creek was dwarfed by the nearby Feather River, where much larger salmon were visible leaping from the white foam of the vigorous current. Though the fish historically continued up river to spawn, a barrier dam now blocks their path and directs them into a fish hatchery. We followed the path of a number of titan salmon – some 3-4 feet long – as they wandered up the steps of a long fish ladder and into the hatchery ponds where their eggs will be collected, raised, then released back into the river.

The reason for the salmon diversion lies farther up – the Oroville Dam. Standing at some 770 feet above the creek bed, it is the tallest dam in the nation, and a stunning engineering feat to behold. The amount of water it impounds is mind boggling. And to climb to the summit of the monstrous hill and look down into the reservoir, only to see the water looming a few hundred yards below where it’s supposed to be – well, it makes the severity of the current drought much more tangible.

Part of dam construction involved moving a few important items out of the flood path, including the “mother orange tree,” the oldest orange tree in the state. We paid her a visit at her relocated home next to the Oroville park headquarters, and though there were some sumptuous looking oranges on the branches, none were within reach.

But perhaps the most personally enjoyable river we came across was Chico Creek. The water runs through a massive park at the edge of Chico. But one portion has been dredged out, lined with cement, and converted into a massive public pool with a constant stream of fresh river water flowing through it. An irresistible venture on a regular summer afternoon, and even more so on the 108 degree day we visited.